The criteria for an effective ferment

Known origin and precise identification of the strains used. Original strains humans who naturally colonize our intestines are preferable. Strains submitted to studies having proven their safety and their good tolerance. Survival of the ferments during the process of manufacturing the product. The choice of strains having good stability is important. The industrial manufacturing process must preserve their integrity. A product of quality must be able to guarantee a stability of the ferments over 3 years. Sufficient resistance of the enzymes to stomach acids and bile salts in order to to arrive alive on their place of action, the intestine. The ferments of human strains are adapted to our digestive environment and will resist better. Interaction capacity of the enzymes with the intestinal mucosa. A good ferment must ability to adhere to the cells of the intestinal mucosa to allow an exchange information and, for example, boost immunity. Beneficial effects of ferments demonstrated by scientific studies. 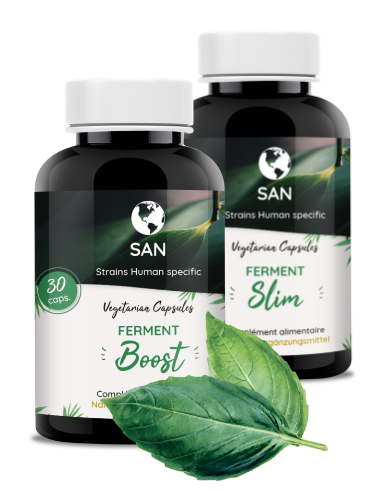 Specificities of our Ferments

The bacteria used in our ferments are naturally present in the intestinal flora. 99% of the other ferments on the market are of animal origin! Naturally adapted and perfectly tolerated, the bacteria of our ferments HUMAN SPECIFIC cling to the intestinal mucosa. This allows to colonize the ENT sphere in 24 hours. The strains used are resistant to stomach acid and bile. They survive the passage in the stomach and small intestine. No chemical capsule called "GASTRO RESISTANTE" but we rather use vegetal capsules. The strains are cultivated and put into production according to the GMP standard (ISO 22000 laboratory). Our enzymes are controlled and authorized by AFSCA, AFSSA and AESAN. Our ferments are registered, notified and we guarantee full traceability of the origin of the strains used. 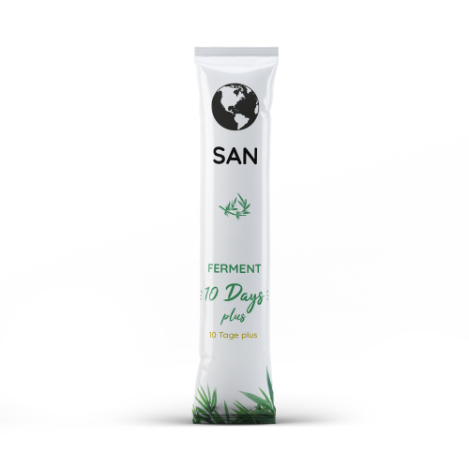 Ferments Human Specific are living microorganisms that, when ingested in sufficient quantity, have positive effects on health, beyond the traditional nutritional effects (FAO, WHO, 2011). Ciliated, of human origin, they have the property, unlike certain strains of animal origin, to cling to the intestinal wall (Cell Wall). They each have original properties like maintain and restore the intestinal flora when taking antibiotics, eliminate the bacteria responsible for ulcers, to produce substances antimicrobials and antibiotics, improve dental health by eliminating from the oral flora the bacteria responsible for cavities, but also inhibit the growth of other pathogens and lower the pH in the intestines. 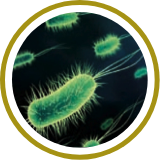 Bifidobacterium Longum also called Bifidus, belongs to the family of lactic acid bacteria. They participate in the fermentation of milk as part of the manufacture of cheeses and preparations similar to yogurt. She makes up the bulk of the intestinal flora of newborn fed breast milk because it contains a disaccharide essential for its growth, and is also present in the intestinal flora of the adult man in addition low concentration.This is a probiotic whose quality main thing is that it produces large amounts of acid lactic acid, which leads to a drop in the pH which is favorable and that would inhibit the growth of other germs. 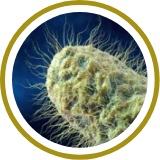 Streptococus thermophilus, is a food bacterium, thermophilic, present only in the fermentation of milk and especially in yoghurt and emmental, the County or Parmesan. This probiotic improves digestion lactose.In children who have received a supplement of this probiotic we could observe better growth on a period of 6 months (Notchida & al. severe inflammations of the digestive system and particularly of the small intestine (Butler RN et al 2009). This probiotic reduces the risk of diarrhea associated with antibiotics, a problem that often results from taking this family of drugs (Beauchamp, Kimberly, 2004). Else research shows a sharp decrease in cancer lung in mammals (Carper, 1993). 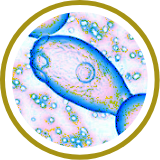 Saccharomyces Boulardii, is a tropical strain of yeast isolated for the first time in 1923 from lychee fruits and mangosteens, by the French scientist Henri Boulard. It is after observing populations of Southeast Asia chew the skin of lychees and mangosteens in order to try to control the symptoms of cholera, that Henri Boulard first isolated this yeast in 1923. This yeast has the tremendous property of maintaining and restore the intestinal flora of the large intestine as well as that of the small intestine; we talk about probiotics. We discovered that in ant that Probiotic S. Boulardii is more effective than the bacterium Lactobacillus itself (Van den Plass 1999). It has been shown that Saccharomyces Boulardii is non-pathogenic, non-systemic (the yeast remains in the digestive system rather than spreading everywhere in the organism), and develops at the temperature unusually high of 37 ° C (Egervärn M. et al, 2007). The yeast Saccharomyces Boulardii is offered by SAN under two packs of 30 and 60 capsules of 9 mg. 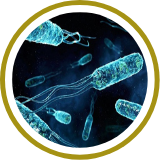 Lactobacillus casei, is a lactic acid bacteria isolated in the milk, cheese and the gastrointestinal tract of man, pig and birds. This probiotic Lactobacillus Casei defensis comes from research (Djamel Drider and Hervé Prévost 2009). This bacterium, of human origin, used like probiotic, fight Helicobacter pylori, responsible many stomach ulcers (Sachdeva 2009). This probiotic has also been shown to be effective in prevention of antibiotic-related diarrhea (Hickson 2007). it is also proven that these bacteria can significantly reduce the risk of re-offending superficial tumors of the bladder in humans (Aso, 1992, 1995). Finally, current research shows a clear reduction of allergies, prevention of the spread of Salmonella (Paubert & All 1995), a reduction in inflamation of the intestines and the development of colorectal adenomas in mammals. 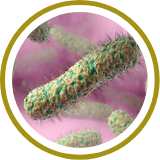 Lactobacillus acidophilus, is a lactic acid bacteria, isolated in humans in the 1970s. This probiotic has the great property to develop antagonistic activity against certain pathogens of food products such as Staphylococcus aureus, Salmonella typhimurium, Escherichia coli and Clostridium perfringens (Sanders 2002). It is generally considered that the dominant species of the vaginal flora of the healthy woman belong at the Lactobacillus acidophilus complex (Vasquez, 2002). Finally the administration of the probiotic accompanied of antibiotics leads to a decrease in colon tumors in mammals (Goldin 1984). 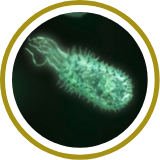 Lactobacillus reuteri, is an intestinal lactobacterium that has developed traits highly adapted to life in the digestive tract of humans. The presence of the bacteria Lactobacillus reuteri is often in breast milk (Sinkiewicz 2008). Research has shown that infants fed at Lb. reuteri fall less often sick, require fewer visits to the doctor, and are less absent from daycare (Tubelius, 2005). This probiotic produces reuterin and reutericycline, antimicrobial and antibiotic substances from a broad spectrum that inhibits the growth of certain harmful bacteria this without destroying the intestinal flora of lactic acid bacteria while improving the ability of the tract to inhibit the growth of Escherichia coli (Cleusix V et al., 2004). Isolated from oral flora, it can also improve health dental disease, by fighting Streptococcus mutans, a bacterium responsible for tooth decay (Nikawa, 2004). The strain of human origin Lactobacilus Reuteri used in the proposed ferment is ATC 55730. 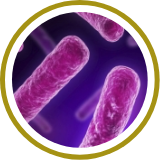 Gasseri, The genus Lactobacillus represents the lactic acid bacteria group, the most ubiquitous. Indeed, these colonize all habitats containing carbohydrates fermentable, hydrolysis products proteins, vitamins, growth and a low oxygen content. More particularly, the species Lactobacillus Gasseri is naturally present in the digestive tract of man and animals. The strain Lactobacillus Gasseri THT 031301 has, in turn, been isolated from a human gut. 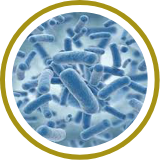 Bifidobacterium animalis is a species of lactic acid bacteria of the family of Bifidobacteriaceae, isolated in materials faeces of most animals (pigs, rats, chickens etc.) and men. It exists two subspecies animalis and lactis, the first animalis, isolated materials faeces of the rat and the second lactis isolated from that of chicken and rabbit as well as milk fermented, sewers and recently human stools. Like those used in our ferments. Properties probiotics of two lactis strains DN-173010 and lactis BB-12 were very studied. They come in products widespread trade. This bacterium found in all mammals and is therefore very important in humans. 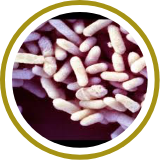 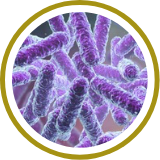 Lactobacillus helveticus is a bacteria in form of producing stem. It has been shown that the consumption of fermented milk powder with L. helveticus decreases the pressure arterial through the presence of tripeptides who have enzyme inhibiting activity conversion1. However other studies show contradictory results2,3,4. She is also able to metabolize a lot of fiber and also power to compete with sources of carbon. The name of the bacteria is derived of Helvetia, the Latin name of Switzerland. 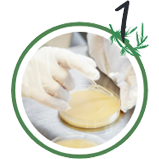 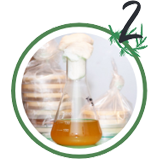 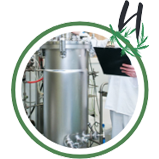 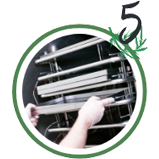 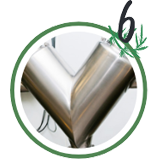 Stem preservation:After being isolated, studied and selected, the bacterial strain is stored at -80 ° C.

Précultures :A first, then a second pre-culture is performed by inoculating vials of increasing capacity containing a culture medium specially designed to allow growth of the strain to produce.

Cultures :Fermentors, true bioreactors (capacity from 2 to 3 000 liters), are inoculated with pre-cultures. 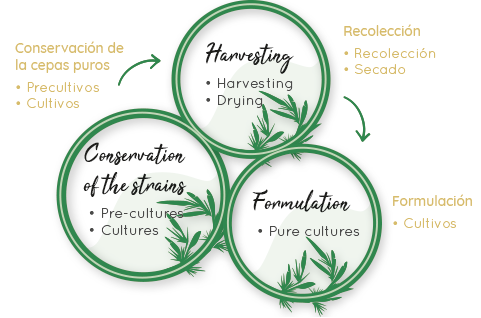 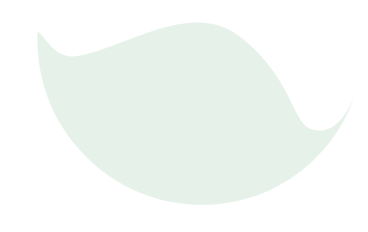 Harvesting:At the end of fermentation, the biomass is recovered by centrifugation.

Drying:In many cases, the method used is lyophilization. This is an operation of dehydration of the product, by sublimation of the water it contains.

Formulation:Depending on the purpose, a more complex wording can be developed by our engineers. Pure culture will then be mixed with other active ingredients such as other pure bacterial cultures, fibers prebiotics, digestive enzymes, vitamins, minerals, plant extracts, etc. 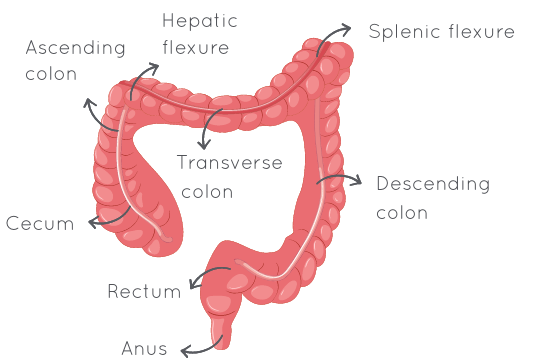